Brownsville was predominantly Jewish from the 1880s until the 1950s. In 1887, businessman Elias Kaplan showed the first Jewish residents around Brownsville, painting the area as favorable compared to the Lower East Side, which he described as a place where one could not get away from the holds of labor unions. Kaplan built a factory and accommodations for his workers, then placed a synagogue, named Ohev Sholom, in his own factory.

ADD YOUR STORIES AND PHOTOS HERE!

All About Brownsville – Table of Contents

Despite its lively atmosphere, Brownsville remained a troubled neighborhood and its Jewish residents were among the poorest of the city. Alfred Kazin, who grew up in Brownsville and wrote about his memories, described the neighborhood in the early twentieth century as “New York’s rawest, remotest, cheapest ghetto, enclosed on one side by the Canarsie flats and on the other by the hallowed middle class districts that showed the way to New York” (Kazin, 18). Historian Daniel Soyer writes that Brooklyn’s inhabitants also represented “the strained relationship between so-called Uptown Jews (wealthy, Americanized Jews mainly of central European origins) and Downtown Jews (poor eastern European immigrants)” (Soyer, 40). Brownsville’s small circle of middle class Americanized Jews remained anxious at the turn of the century, first that the influx of poorer eastern Europeans would undermine their own hard-won respectability, and second because they continually compared themselves to their Manhattan counterpart, a much larger and wealthier Jewish community (Soyer).

Continual efforts made by elite New York and Brooklyn Jews to Americanize their poorer counterparts led to the founding of the Hebrew Educational Society (HES) in 1899, the result of efforts by prominent New York Jews associated with the Baron de Hirsch Fund. As the purpose of the institution was to Americanize members of Brooklyn’s Jewish community, in the beginning HES emphasized instruction in English and citizenship, with all activities geared towards “teaching  [Jewish immigrants] valuable lessons in thrift, manners, and citizenship.” Soyer writes, “Despite the condescending intentions behind many of the programs, Brownsville participants responded favorably” (42). HES’s donation of 7,000 volumes led to the opening of the first Brownsville public library in 1905, which was heavily utilized by the local population from the start (Brownsville Library website).

In the 1930s began the decline in Brownsville’s Jewish population, which accelerated in the 1950s and especially in the 1960s when Jews left as African Americans began to move into the area following World War II (Soyer). The number of blacks in Brownsville doubled between 1940 and 1950, making up 22 percent of Brownsville’s population by 1957. As demographics shifted, Brownsville became the site of both developing racial tensions and new progressive efforts to combat racial injustice and inequality by groups such as the racially integrated Brownsville Boys Club (BBC). Many blacks had come from the South seeking jobs in the garment industry but found dwindling numbers of factory jobs and a good deal of exclusion (Snyder-Grenier, 102). Sorin describes, “Younger, poorer, more recently uprooted, and victims of historic oppression and deprivation, blacks in Brownsville were disproportionately the perpetrators and victims of vandalism and violence” (22).

[youtube https://www.youtube.com/watch?v=4U18z38Mqtk]Levine and the BBC and other progressive political organizations with strong bases in Brownsville helped to build a left-leaning alliance between Brownsville Jews and blacks, which represented a facet of the progressive alliance between organized labor and the civil rights movement being forged on a national scale. However a dent was put in the coalition following May 9, 1968 when the local school board of Ocean Hill-Brownsville fired thirteen unionized white educators. The firings were carried out as part of a policy of “community control,” which proposed that students of color would perform better in schools if the school board hired more people of color as role models.

The firings led to a series of three strikes led by the United Federation of Teachers (UFT), which shut down the schools for a total of 36 days between September and November of 1968. Ultimately, the UFT won the teachers back their positions, but the incident caused a rift in the alliance between Brownsville’s residents. To the black community city-wide, the UFT action seemed designed to undermine black leadership (Ahern, “The Strike That Changed New York”). Putting the progressive coalition back together and promoting positive intergroup relations remained the primary goal of Irving Levine and the Brownsville boys well into the 1990s (Sorin, 127). Meanwhile, Brownsville residents and merchants continued to organize to improve the community on other fronts.  The church took on a new active role in the neighborhood, as the East Brooklyn Churches, a non-profit coalition of mostly black churches, set out resolving Brownsville’s housing problems with the construction of the Nehemiah homes.

Meanwhile, as interracial dialogue and action continued to be promoted by progressive organizations within Brownsville, white flight out of Brownsville continued. In the post-war period, rather than migrating to Flatbush or Eastern Parkway, many Jews began to migrate to Canarsie or suburban communities in Long Island or New Jersey. By the late 1960s, following a “wholesale exodus,” fewer than five thousand Jews remained in Brownsville, most of them elderly (Ford, 135).

Some areas of Brownsville have retained the bustle of the early century, such as Pitkin Avenue which remains an active retail district. The neighborhood is no longer ethnically insulated, as long-time Jewish business owners have been joined by Israeli newcomers who now dominate the garment industry, as well as Korean, East Indian, and African American merchants (Snyder-Grenier, 102-103). Still, many social problems associated with poverty, including crime, violence, and drug addiction, have continued to burden the neighborhood for decades. 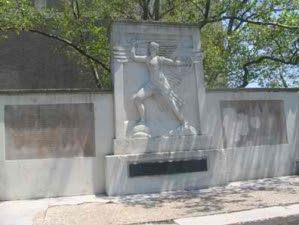 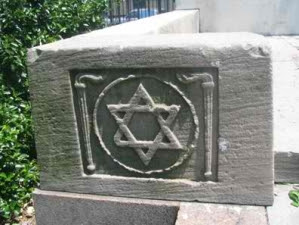 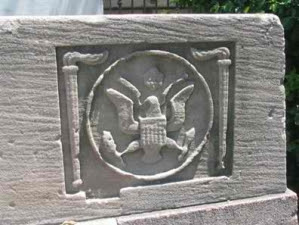 The triangle of Pitkin and East New York Avenues and Legion Street was called Zion Park as early as 1911. The Zion Park War Memorial, also known as the Brownsville War Memorial, was created by sculptor Charles Cary Rumsey (1879–1922) and dedicated in 1925. It lists local war heroes who died in World War I. The space was renamed Loew Square in honor of the massive Loew’s Pitkin Theatre (see below) in 1930, but by 1997 the theatre was long shuttered and the name was changed back to Zion Triangle.

Street name mavens have plenty to chew on here in Brownsville, as many streets have changed monikers over the decades. Barrett Street was changed to Legion in the late 1930s, while Ames Street became Herzl in homor of the Theodor Herzl (1860-1904) the Austrian journalist and father of modern Zionism, a movement that led to the creation of the state of Israel in 1948. Not sure when that change was made, but it was between 1913 and 1938.